The experience at the ashram, the bus ride, the monsoon, left me drained and depleted and soggy. I’d been traveling for five weeks. Certainly not a long time by long term travelers, but long enough in that a badly needed respite was well, badly needed. As the long, overnight bus ride pulled into the bus station, I was simply bedraggled. Hadn’t showered for two days, shaved, I smelled, I was probably close to being mildewed. I really needed to just to a complete makeover of body and mind and soul. And I really wasn’t sure I knew where I was going other than a traveler’s tip from Goa was to go to Fort Cochin. 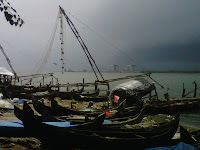 As the bus pulled into the Cochin station, all I saw along the way was a big city, nothing real special and my heart sank. This was to be my oasis? I asked an auto rickshaw guy to take me to Fort Cochin..it was all I had to go on. As we approached Fort Cochin my spirits were elevated, no make that restored. I found my new favorite oasis in Fort Cochin. Relaxed tree lined streets dotted with home stays and guest houses and there were even western travelers here. OMG…I found it, another sanctuary like in Rishikesh, where travelers actually go.
I checked into Ann’s Residency and took a shower, had breakfast of hot coffee, omelet, toast, people to talk to, WIFI…in other words, paradise! As I wrote earlier, if you don’t like where you’re at something better will come, and it did. And immediately went to work. Deadlines for book events were upcoming, airline tickets needed to be booked, clothes needing washing, and stuff back home needed to be mailed..and my phone needed a minutes recharge. I did it all and never felt so relieved in my life!
I even had a visit by a journalist for a face to face interview for The Hindu newspaper. The nice family of the guest was wondering who is this guy who takes over the computer, has journalists showing up and laying on all his demands? A guy who needed it, is who! I proceeded to get to know this charming and quaint seaside town by casually strolling the streets. I was restored!
The next couple days were more of the same. I took a tour with an auto rickshaw guy of Jew town, spoke to a few shop owners who all seem to be from Kashmir, and we collectively rhapsodized about Kashmir. Kind of funny, all very true. And I ate well. Breakfast was provided by Ann’s Residency and a hearty one at that, coffee, omelet, toast and a huge portion of freshly cut pineapple, mango, papaya and a yellow kiwi.
Again, I had the place to myself, other than the family, but no fellow travelers. It dawned on me I was missing them. Whether it be a brief encounter or days on end, like The Brotherhood of Rishikesh. The monsoon rain was the reminder that this is off season. Late July and August, the owner of Ann’s residency said, will start to boom. I debate this within myself what is better? The place to myself and all the attention or to compete for rooms, service etc?
The morning I left Ann’s, I found a French family and young man from Germany in the van waiting for me to take us all to the boat for the long and highly anticipated awaited backwater trip from Cochin to Alleppey. And it was fun. We all became instant friends, laughing, chatting and a slight shock factor that I speak some French. It was a tranquil ride too, full of tropical beauty and a slow paddled ride down stream. We stopped on shore for a deliciously simple lunch of various Keralan treats served on a banana leaf. The ride was nearly over when I discovered we weren’t going as far as Alleppey. As it turns out we were 40 klics from Alleppey and I was to take a bus. The boat docked and said goodbye to my new friends, an all too brief yet fun time. And found myself on a horribly crowded bus that lasted two hours and seemed forever. What a buzzkill after such a tranquil day. It was nearly dark and raining when the bus arrived into Alleppey. And after some fruitless searching for the hotel the Cochin guy gave me, the auto rickshaw guy found it. It was a simple yet nice place situated on the lagoon, and had dinner…alone. It was raining and didn’t have the greatest sleep as I had an early wake up call for the train to Trivandrum. 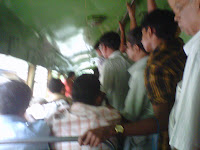 When I arrived at the station to purchase a ticket, there was a huge line and my train time was quickly approaching. I cut into the front and got a ticket and boarded the incredibly crowded commuter train, No AC sleeper here, it was strictly to get from point A to B. I had to stand the first hour, and sat smushed next to my fellow seat sharers. All my relaxed time at Ft. Cochin was out the window with the crush of Indian humanity with the back to back bus and train rides. I needed some solace, I needed to be restored again. And then it dawned on me: I was in Trivandrum, and scheduled to take a hotel in town. But just down the road was the place where I first set foot on Indian soil 26 years, Kovalam Beach. Kovalam Beach! Go there I practically shouted, and so I did!
Posted by Mark Stephen Levy at 5:09 AM No comments:

This was said to me by an old saw of a man, when I explained to him my concern about a very wet monsoonal India…yep, just keep loading the wagon…you’ll get there!

Posted by Mark Stephen Levy at 9:30 AM No comments:

EVERYBODY HAS THEIR OWN SHANGRI-LA

In speaking with a friend the other day who I hadn’t spoken with for a long time, I told him my news of my book OVERLAND being published in India. I also told him I was going to go there and tour around India to promote the book as well as detox from the pressures of western society. His reaction was “Well, I would go on a boat in the Caribbean and tour around there.” I said that sounds nice and all, but also sounds kind of boring. I said everybody has their own Shangri-la. Meaning to each his own, right? My Shangri-la is actually Shangri-la, somewhere in the Himalayas where it’s beautiful, peaceful, spiritual, you know, Shangri-la! In reality Shangri-la doesn’t exist.

From Wikipedia: Shangri-La is a fictional place described in the 1933 novel Lost Horizon by British author James Hilton. In the book, “Shangri-La” is a mystical, harmonious valley, gently guided from a lamasery, enclosed in the western end of the Kunlun Mountains. Shangri-La has become synonymous with any earthly paradise but particularly a mythical Himalayan utopia — a permanently happy land, isolated from the outside world.


That’s what I’m talking about. What’s your Shangri-la?
Posted by Mark Stephen Levy at 3:18 PM 1 comment: