SOWING THE SEEDS OF THE STORY OF OVERLAND, PART 2 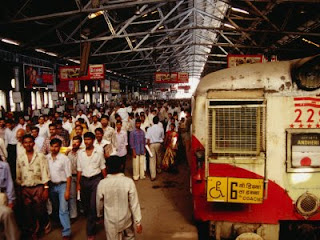 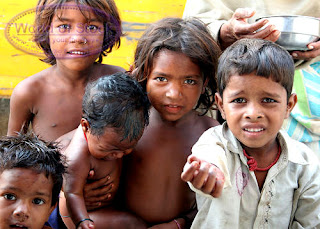 I spent my first full day in India walking around in total awe. In awe that I was even here, in awe of what I saw. I was still dressed in westerner's clothes since of course, my pack was in Sri Lanka. I wore some khaki pants and a yellow striped short sleeve shirt that pretty much was a walking advertisement for "being a westerner, come hit me up for 'something'".
Suddenly, I found myself with an entourage full of local children, with their hands out asking for 'paise", or spare change. Or 'school pen'. There had to have been 50 kids as I walked around the area as the pack conintued to grow, like the Pied Piper leading them outside of town.
I was becoming diturbed and flustered by this and all at once, as in awe as I had been, my western ways of self containment came storming back and thought if this is how it's going to be here I better do something quick otherwise all my dreams and "awe-ness" of being in India were evaporating rapidly.
I had read in "the book" (Lonely Planet) that this happens every where in India and there is only one way to handle it. I turned around, made hand gestures like a baseball umpire calling the play "safe", rasied my voice and said "NO!" This stopped them, and I moved on...alone.
As I walked a feeling came over me of peace, harmony, gratitude, and self-confidence, that I was going to like it here India, that it was all going to be OK.
Was it ever!
The next six weeks were as a magical a time as I had ever experienced, and the changes that evolved within me were profound, as each day my western 'ways of being' were morphing into the ways of the east...and I liked it!
Materialism was "yesterday". It was like a snake shedding his skin, and slithering around in his new skin, feeling pretty good about it.
OK, I wasn't slithering around, but I know I usually walked around with a smile on my face and felt something I wasn't quite used to and it had become a new way of being: happiness, serentity, peace.
India has a billion people and many times, particularily when arriving in a train station or off a bus, that to them, you're a new customer and you must go with them to their hotel, "my brother give you cheap price". It were times like those that all one billion people were now your entourage. But to counter this, you have the name of a hotel in mind, (taken with consistant research from 'the book'), and you say the name to them, and one guy emerges and takes you there...the rest back off and the smile re-appears, almost clock work. Ah, a new town, new things to see...day in day out, whther lingering at a tea stall for 3 hours or a tour of a Maharaja's palace, or browsing the open air markets, the hustle and the bustle and the chaos was like being on a movie set...but obviously it was real life...real life in India, and the chaos, and noise and clutter never mede me feel more at home as it did in India.

And so now you may be either wondering or understanding: what does this have to do with "sowing the seeds of the story of OVERLAND?"

Well my friends, let's just say it was the field research needed to write OVERLAND with conviction, with honesty and to have captured the feelings and experiences back then in India. For Danny, our main character in OVERLAND, he experiences the same transition from his cosy Western ways to man of the world now adjusted and loving the ways of the east.

I wonder those of you out there reading this post: what have you experienced when you traveled in any 3rd world country. Did you feel the same too?

As always, comments are welcomed and encouraged!
Posted by Mark Stephen Levy at 8:24 AM